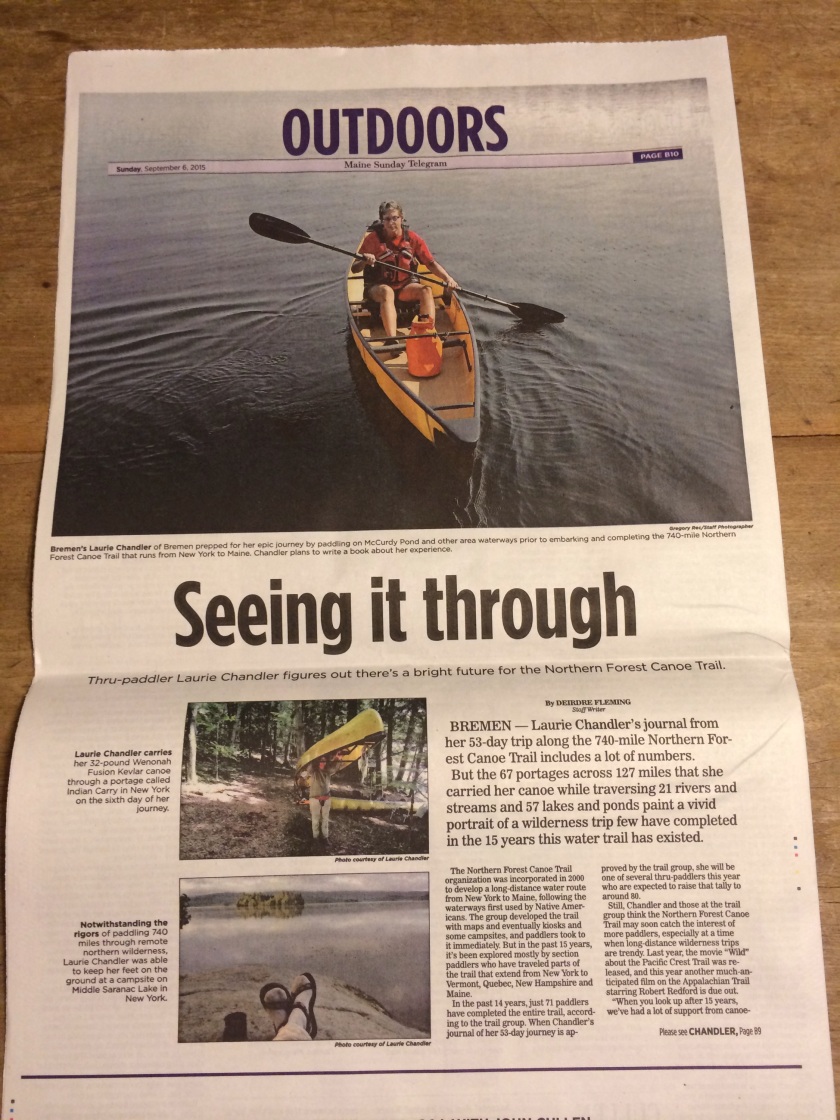 Today at church, Arne Aho asked me if there would be more blog posts.  The answer is definitely yes.

The weeks of being back home have been full.  Since finishing the “missing chapters,” I’ve started scribbling thoughts for the book.  Family visits, house painting, walking and paddling, and a happy start to the school year have filled my days.

I thought you would like seeing two newspaper articles that have been published.  The recognition is fun, but also very humbling.  Both included many photos, which tell the story well.  Hope the links (in blue) work!

Deirdre Fleming, a staff writer for the Portland newspaper, tried hard to meet me on the NFCT.  She and a photographer had hoped to camp and paddle with me.  Alas, we couldn’t connect on the trail, but last Monday she came to Bremen.

Deidre brought her canoe and we went out on McCurdy Pond, from Ed and Carol Knapp’s cottage.  Today’s article in the Maine Sunday Telegram captures the essence of our conversation and promotes the NFCT well.

Paula Roberts wrote a front page  article in The Lincoln County News soon after I got home.  She spent a lot of time with me, covered a generous amount of material and included some of my favorite photos in color in the Aug. 27 edition.

Thanks to both writers for their interest in my story and efforts to raise awareness of the Northern Forest Canoe Trail!

Amazingly, the moment of departure finally arrived, with friends Bill and Mary Bausch stopping by to snap a farewell photo.   Bill will be the expedition archivist, maintaining a record of the SPOT tracking data and updating my progress on an old-fashioned paper map at church.

As Dad and I drove across Vermont and entered the Adirondack Park, I felt calmer than in recent days.  Tiny hamlets with quaint churches appeared as we followed the rushing Hudson River toward its source.  Sparkling lakes, fir clad islands, rustic cabins..all reminders of why I wanted to do this.  We mused about the rapids, our thoughts traveling to our new boats, as yet untested in whitewater.  How sturdy were they, how maneuverable?  Soon we would find out.

We dropped our boats and gear at The Forge Motel, where they kindly let us have our room early.  Then it was off to Saranac Lake with the truck, where it would wait for our arrival.  Dan Brown, who paddled the NFCT last year, had generously offered to shuttle us back to Old Forge.  From the minute we hopped in his car, we were talking about the trail and so appreciating not just the ride, but the stories and pointers.  So many kindnesses already and we haven’t even started!

The NFCT held their first-ever Freshet Fest this past weekend.  Here are old friends, Katina and Sam, sharing their delicious breakfast with me at our campsite in Grand Isle State Park.  This was my first look at Lake Champlain and first taste of the fabulous baked goods from Hero’s Welcome, on North Hero Island, which I hope to paddle to this summer.  Katina and I talked for hours and Sam was very patient, while making us an endless quantity of delicious coffee. 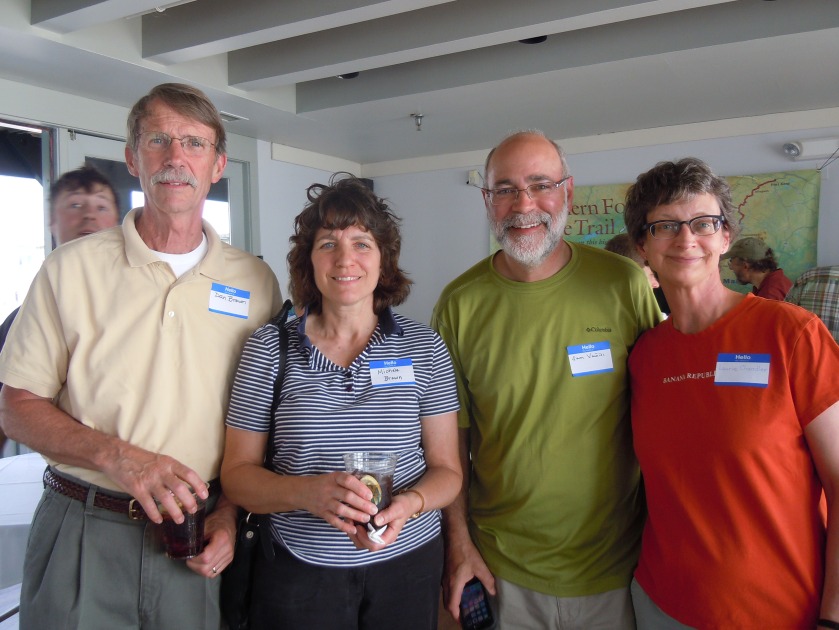 The evening gathering at the Splash Boathouse in Burlington was a great chance to meet lots of kindred spirits, including Dan and Michele Brown, on the left, with Sam and me.  Talking with folks from the NFCT staff and fellow paddlers who I only knew through blogs or emails was very neat and they all expressed their confidence in me and my planned trip.  That meant a lot!

The through-paddlers who shared their stories definitely helped me visualize the trip and made me realize that they just went out there and took a day at a time.  Here we have Mark Fromm (2012), Skip Ciccarelli (2011), Dan Brown (2014), Katina Daanen (2011), Paul Heintz (2008), Nicole Grohoski (2006) and Peter Macfarlane (2013).  Just a sample of the advice I came home with: paddle from your torso, travel light, don’t be afraid to knock on doors, and stop along the way for some chocolate milk and Milanos.  I’ll close for tonight with flowers and a sunset.

A huge number of people attempt a thru-hike of the Appalachian Trail every year and an impressive number succeed.  Not so with paddling the Northern Forest Canoe Trail.  A recent email from NFCT reported that 79 people (only 79) have completed the entire trail…since 2000!

The AT “Class of 2015” has a Facebook page, simply bursting with hikers, many of whom are already out on the trail. How about the NFCT Class of 2015?  Well, so far there is one other person listed in the NFCT paddler blogs, Mack Truax.  Mack is retired and his training regimen certainly puts me to shame.  His typical training paddle is 25 miles, half of it upstream!  It will be so fun to follow Mack and cheer him on as he starts his journey later in May.

Oh well, I am not retired and, even if I was, I probably don’t have a 25-mile paddle in me, at least not now.  So what am I doing for training?  Anything I can.  Earlier this week, we spent a few days at a resort with a great pool.  Between the swimming and using the treadmill with a wicked incline, I was in heaven.

I also started upper body strength training in early March.  I began with 2 sets of 10 reps with 3 lb. weights and am building up to 3 sets of 15 reps with 5 lb. weights.  My exercise routine (every other day) includes the shoulder press, front and lateral raises, bicep arm curls, overhead triceps extensions, and upright rows, hopefully covering many of the major muscle groups.

Yesterday I was able to get out for another paddle on the lake and river, covering 6.3 miles, with some great wildlife out on the chilly, breezy waters: loons, cormorants, a pair of goldeneyes, and a beaver cruising the shoreline on patrol.  Totals for April so far are: 43 miles walking and 24 miles paddling (note that the latter is one mile less than Mack’s typical training day!).