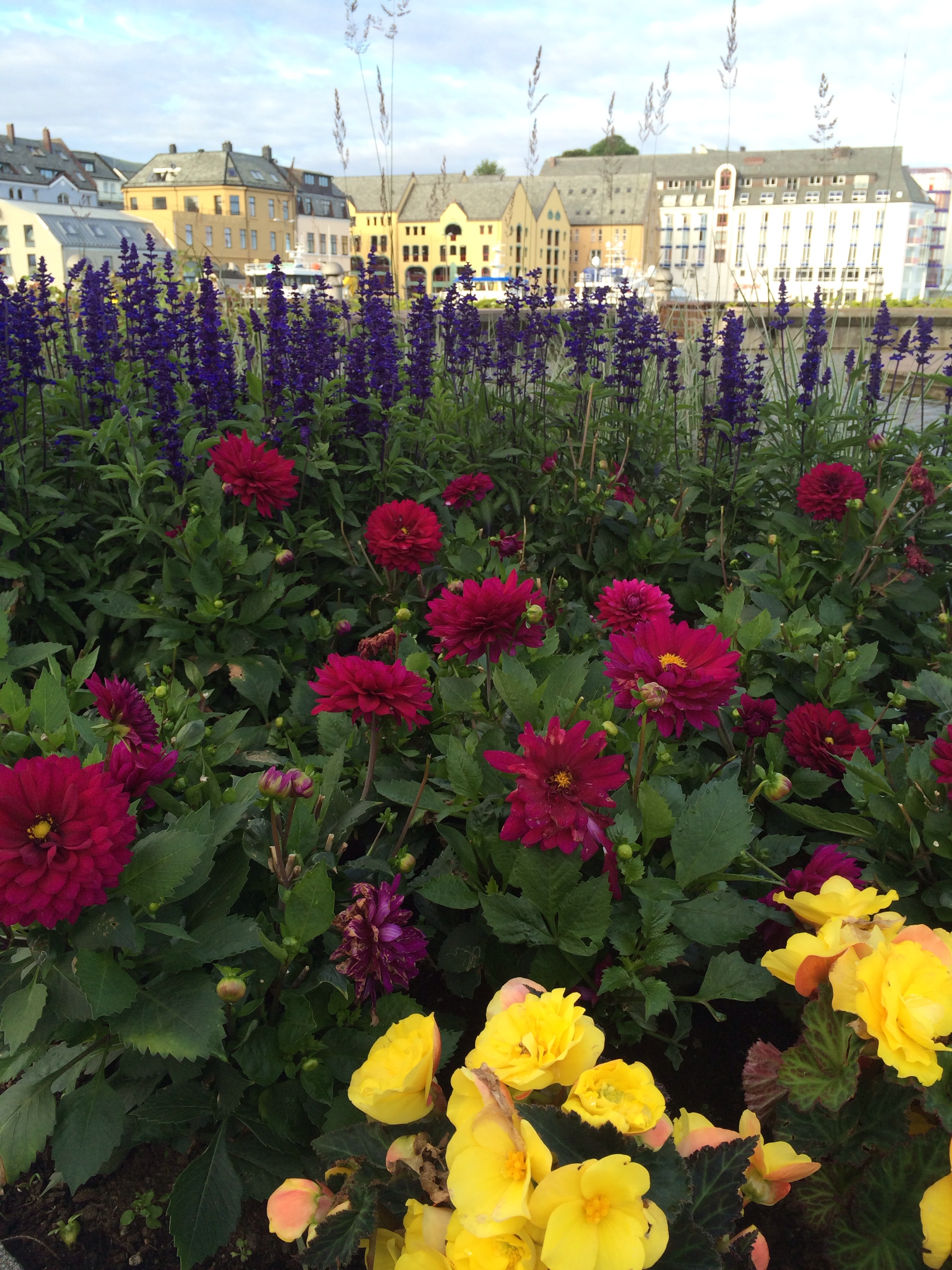 From the moment we docked, bright and early at 7 a.m,, until I reluctantly wandered back on board at the last afternoon moment, I was snapping photos. After a devastating 1904 fire, Alesund was reborn as a fine example of art nouveau architecture, funded partly by Kaiser Wilhelm II of Germany, who had often cruised the nearby fjords in his yacht. 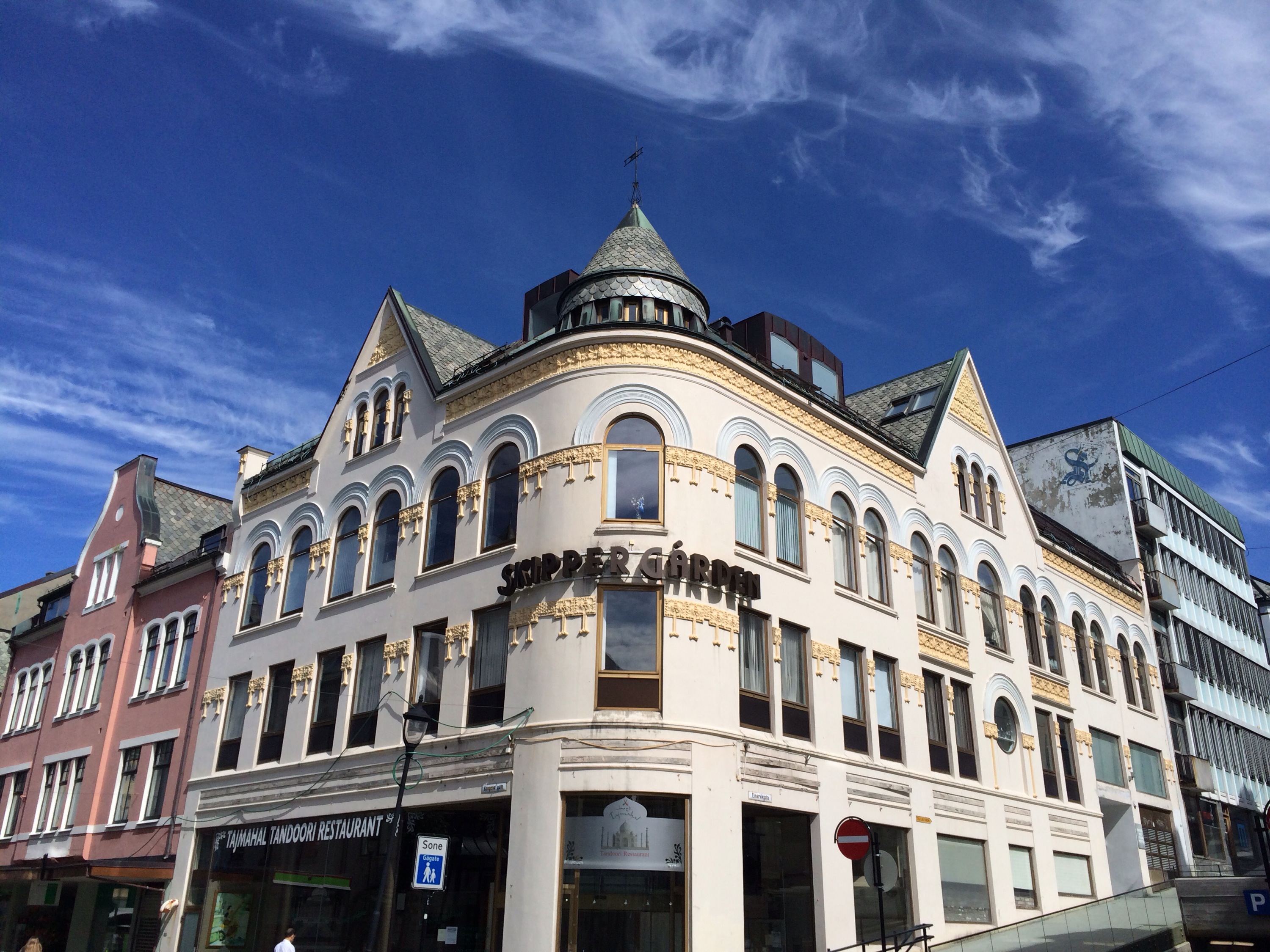 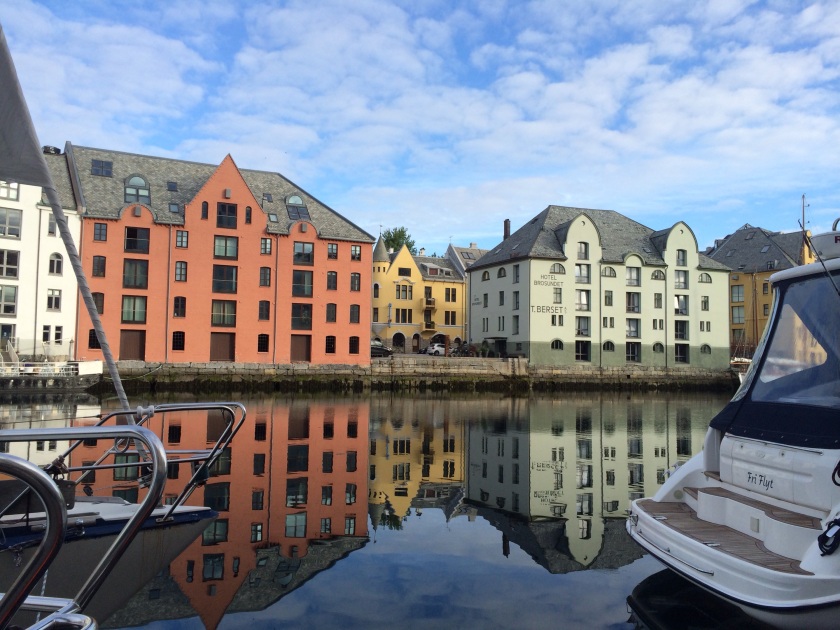 Initially torn between biking and kayaking, the narrow hilly streets and calm sunny weather sent me off to rent a sea kayak for a couple of hours. The pleasing colors, spires, roofs, and decorative touches of Alesund’s architecture were echoed back in the still waters of the canal. My route took me past plenty of evidence of the thriving shipping and fishing industries, whose main export is dried and salted cod. 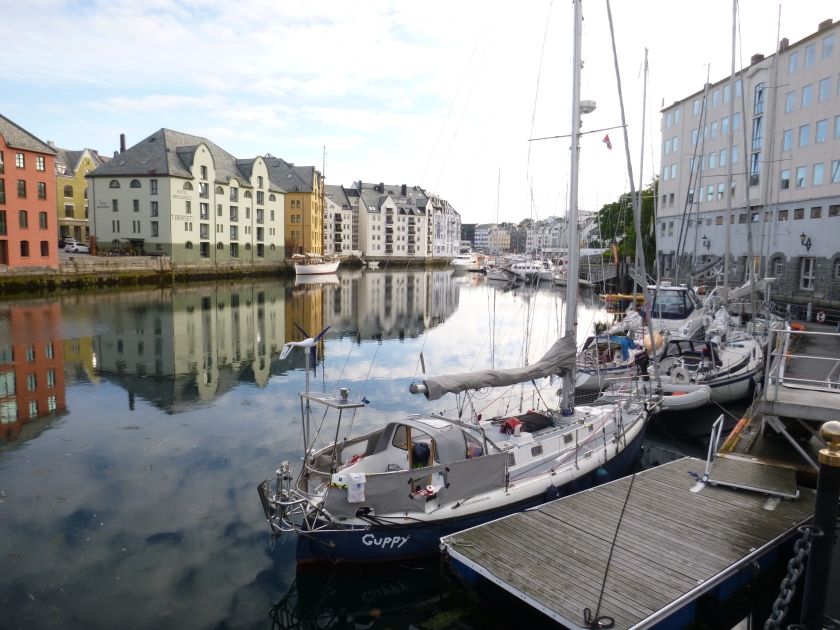 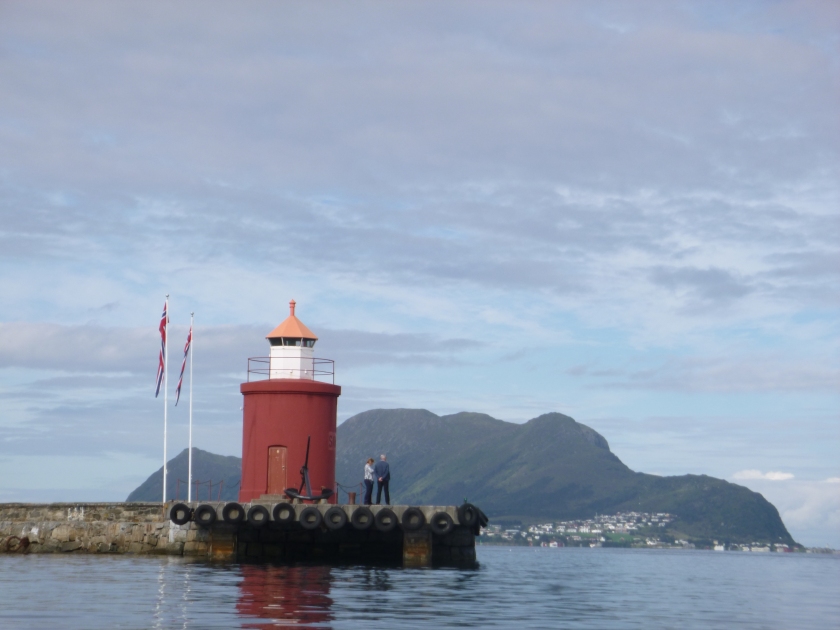 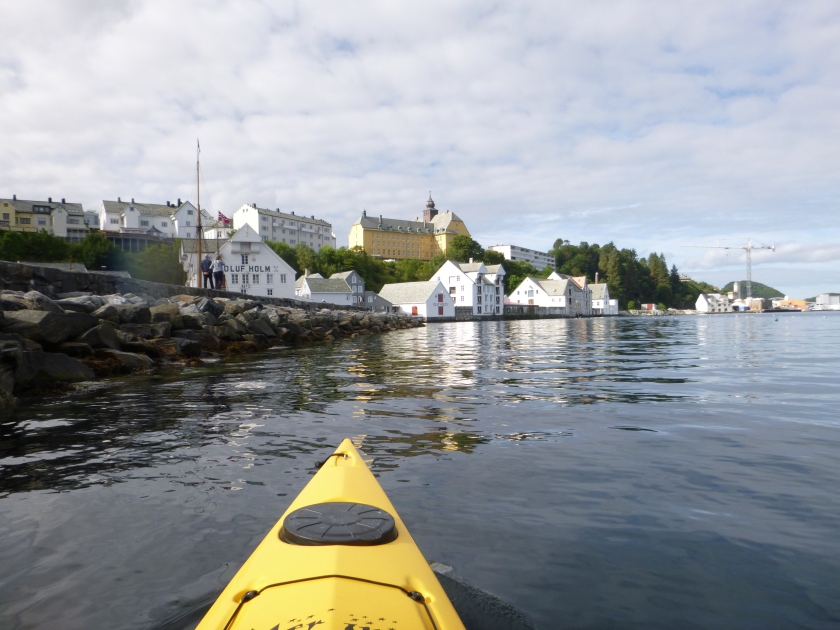 Passing our cruise ship, the Rotterdam, staring up in awe at her bulk, I met our lifeboats going round and round in circles for a drill. Then it was down the coast to explore the shore and islands as far as I could go before my time ran out.

Our internet access has been a major challenge. On the ship, the slow connection is incredibly expensive and in port, the competition for fast Wifi rivals the ruthlessness of the Viking conquests. After the victory of being one of the first online at the information center, I gave it up to go off paddling and then all the internet in the entire town went down. So the first business today will be writing. (And success is mine, thanks to an incredibly kind Norwegian man at the hotel who generously provided me with the password, a quiet corner, and his own adapter to plug in my ancient computer).

Besides having a real live Enigma coding machine and a fabulous display on life during the Nazi occupation, the town museum tells the story of the Uraed. This 18-foot enclosed lifeboat was the first of its kind to sail safely across the Atlantic (from Alesund to Gloucester, MA) during the winter of 1904-05, inspiring the use of such craft in ocean-going ships to the present day. (The town is very, very proud of this vessel and has built a replica whose portholes you can peek through to imagine what life was like for 4 men in that tiny space for 5 icy months.) 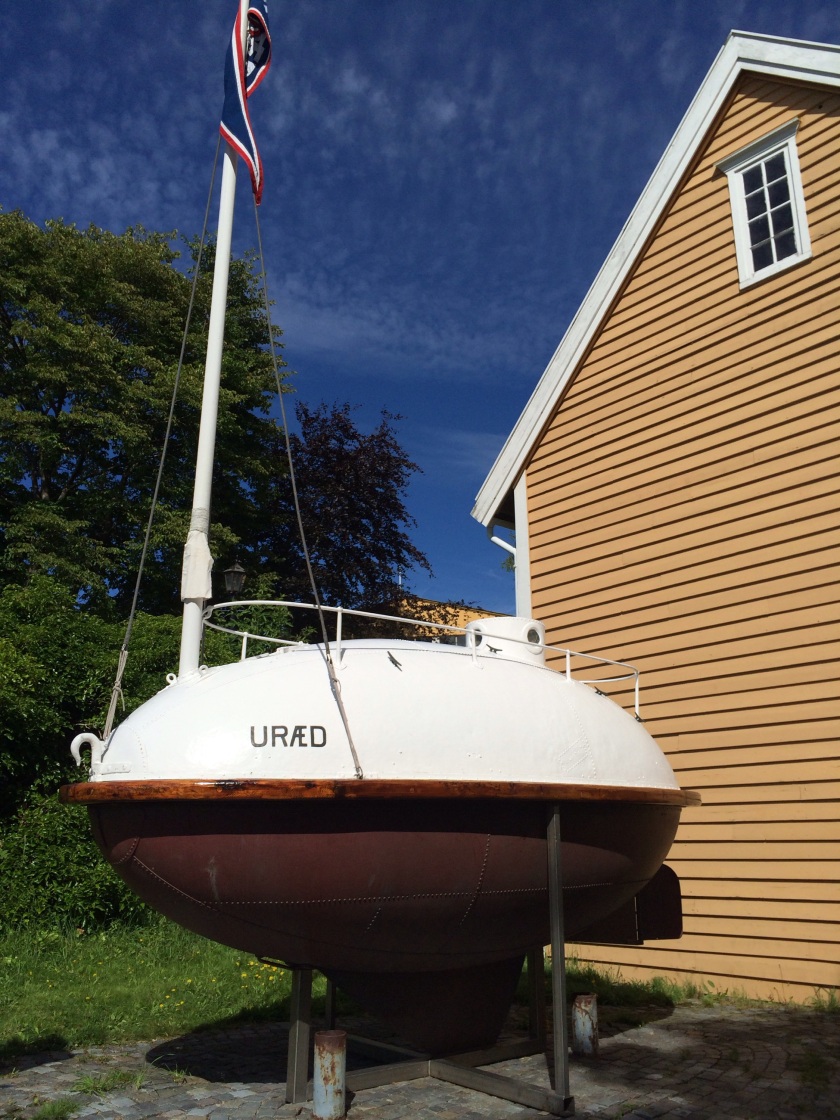 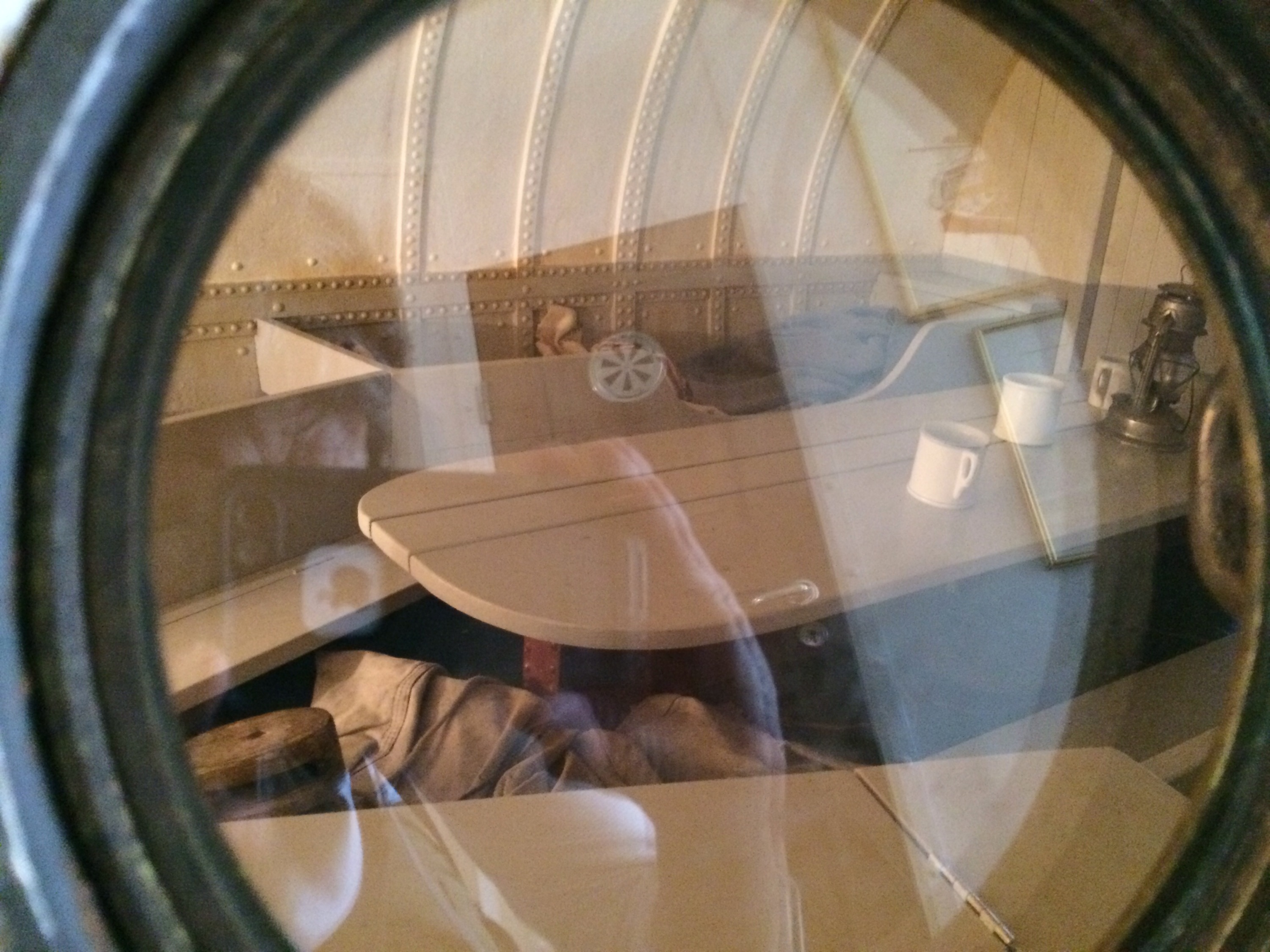 Farewell for today…time to tear myself away from this lovely internet connection to explore Eidfjord, our last port in Norway before we head for Rotterdam in the Rotterdam! 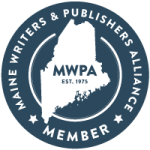