Thanks to a generous invitation, last weekend I attended my first (but probably not my last) Wilderness Paddlers Gathering. Begun in March 1993 during “a blizzard of historic proportions,” this annual event has become a tradition at the Hulbert Outdoor Center in Fairlee, Vermont. For those of us who love canoeing, what could be a better way to spend a March weekend? Sharing stories, photos and videos, skills, and incredible amounts of tasty food with those who love canoeing the waters of the north. 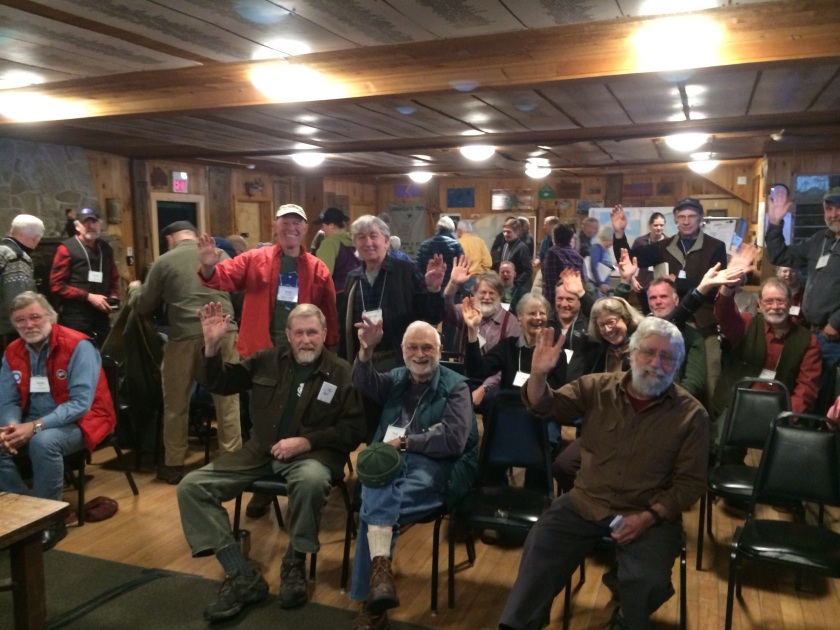 Once there, I discovered a few old friends and made lots of new ones. I had 25 minutes on Saturday morning to tell my story and practiced at great length on the 4-hour drive over to this comfortable camp on the NH/VT border. See what a great audience I had! As always, though, listening to everyone else was the most fun. Through the beautiful magic of media, we rafted the Grand Canyon, paddled the Alatna and Koyukuk Rivers in Alaska, and followed Chewonki down Quebec and Labrador’s George River.

My favorite was a documentary, “Into Twin Galaxies: A Greenland Epic.” This hour-long film follows three young explorers on a insanely breath-taking quest kite-skiing across the Greenland ice cap to reach a river that they discovered on Google Earth. Delayed by the terrain and a serious injury, they arrive later than planned to find ice where they expected open water. When fate finally provides them with a churning river filled with huge, uncharted waterfalls, viewers will hold their breath in astonishment at what they try to run. Seize the chance to see this one when you can!

Of course, you never know quite what you’ll learn. Above, retired Vermont fish & game warden Eric Nuse, whose stories are featured in Megan Price’s book series, Vermont Wild, tells a great breakfast story. Seems there was this ripe moose carcass caught up in a tree, one that could perhaps be best removed with dynamite. The key to success, learned the hard way, was to have a long enough cord to get well out of range!

Below is the traveling library that appears at both of the yearly Northern Wilderness Travelers Conferences, including the November Snow Walkers Rendezvous. I borrowed a book that’s been on my list for a long time, Kabloona in the Yellow Kayak: One Woman’s Journey Through the North West Passage by Victoria Jason. I guess that I just can’t get enough of reading by the woodstove, waiting for spring!

7 thoughts on “A March gathering of canoeists warms the heart”